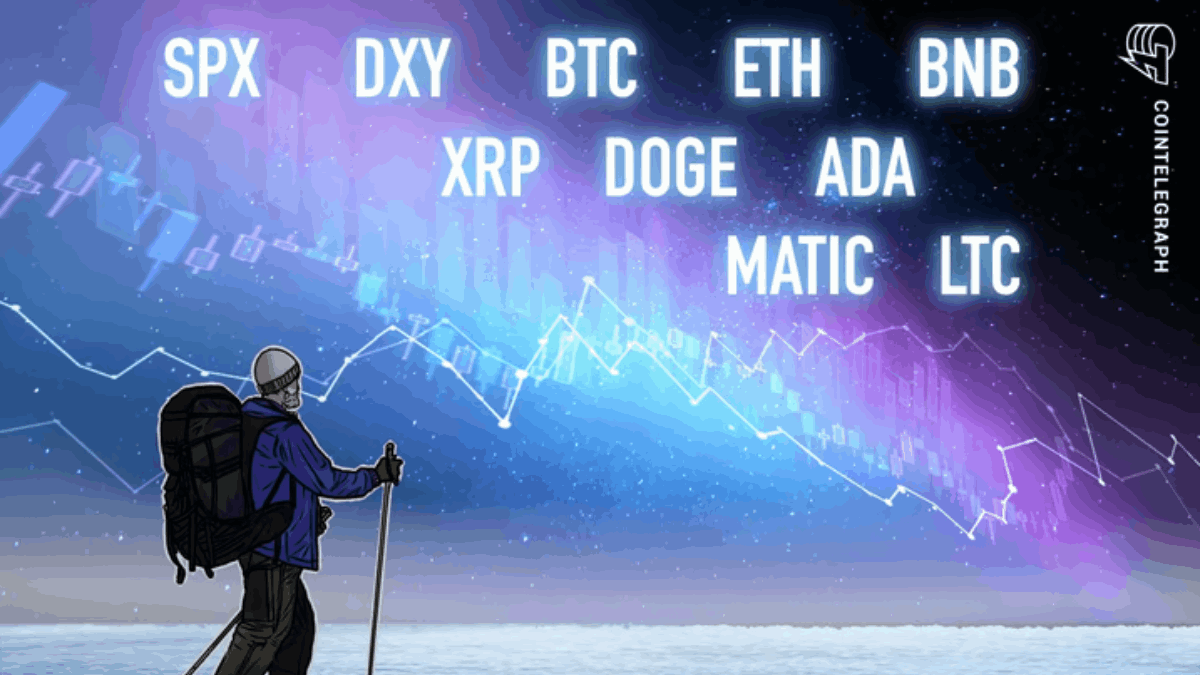 The DXY has turned bearish and that could prove to be a boon for SPX, cryptocurrency and Bitcoin.

There are several green shoots visible for the cryptocurrency sector for 2023. The U.S. dollar index (DXY), which usually moves in inverse correlation with Bitcoin may have topped out. This increases the likelihood that select cryptocurrencies may be close to forming a bottom.

Several traders miss buying at lower levels because they attempt to catch the bottom. Instead, long-term investors who believe in the crypto story may consider building a portfolio or adding positions in batches. Thus, they will have some skin in the game and not repent when the next bull move begins.

Could the U.S. dollar index continue its correction and will that benefit risky assets? Let’s study the charts to find out.

The bears tried to extend the correction last week but the bulls managed to defend the 3,764 level. This indicates that the bulls are trying to form a higher low in the S&P 500 index.

The 20-day exponential moving average (3,880) is sloping down and the relative strength index is near 45, suggesting that bears have a slight edge. If bulls want to gain the upper hand, they will have to push the price above the moving averages.

That could open the doors for a possible recovery to the downtrend line where the bears may again mount a strong defense. Buyers will have to pierce this resistance to signal a potential trend change.

On the contrary, if the price turns down from the 20-day EMA and plummets below 3,764, the selling could intensify and the index may slide to 3,650.

Buyers tried to propel the U.S. dollar index above the 20-day EMA (104) on Dec. 28 but the bears held their ground. This indicates that the sentiment has turned negative and traders are selling on relief rallies.

The bears yanked the price below the immediate support of 103.44 on Dec. 30, indicating the resumption of the downtrend. The index could next drop to 102 and thereafter plunge to the psychologically important level of 100.

This negative view could invalidate in the near term if the price turns up from the current level and breaks above the 20-day EMA. The index could then rally to the 50-day simple moving average ($106).

Bitcoin has been oscillating between $16,256 and $17,061 for the past few days. This tight consolidation indicates indecision among the bulls and the bears.

The 20-day EMA ($16,777) is flattening out and the relative strength index (RSI) is just below the midpoint, suggesting a balance between supply and demand. The next trending move is likely to start after the price escapes the range.

If the price breaks below $16,256, the selling could accelerate and the BTC/USDT pair may retest the crucial support at $15,476.

Alternatively, if the price breaks above $17,061, the pair could pick up pace and climb to the overhead resistance at $18,388. This level may again witness a tough battle between the bulls and the bears.

The bulls have failed to drive Ether ETH $1,218 above the moving averages in the past few days but an encouraging sign is that they have not ceded ground to the bears.

This suggests that the bulls will make one more attempt to propel the price above the moving averages. If they succeed, the ETH/USDT pair could rally to the stiff overhead resistance at $1,352. The bears are likely to protect this level with vigor.

If bulls fail to clear the overhead hurdle at the moving averages, the pair could dip to the immediate support at $1,150. This is an important level for the bulls to guard because a break below it will complete a head and shoulders pattern, which has a target objective of $948.

BNB BNB $246 has been trading near the breakdown level of $250 for the past few days. This shows that the bears are trying to flip the level into resistance while the bulls are attempting to thrust the price back above it.

This tight-range trading is unlikely to continue for long. The longer the price remains inside the tight range, the stronger the eventual breakout.

The bears are likely to have other plans. They will try to shield the overhead zone and sink the price below $236. If they do that, the pair could slump to $220 and then to $200.

XRP XRP $0.35 tumbled below the support line of the symmetrical triangle and fell to the strong support at $0.30. The long tail on the candlestick shows that the bulls aggressively purchased the dip to $0.30.

The XRP/USDT pair has re-entered the triangle and the bulls are trying to build upon the momentum by pushing the price above the 20-day EMA ($0.35). If they do that, the pair could reach the resistance line. If bulls scale this level, the pair could jump to $0.42.

Conversely, if the price fails to sustain above the 20-day EMA, it will suggest that bears continue to sell on every rally. The bears will then again strive to sink the price below the support line of the triangle.

The buying picked up further on Jan. 2 and the bulls are trying to strengthen their position by catapulting the price above the downtrend line. If they can pull it off, the DOGE/USDT pair could challenge the resistance near $0.08. A break above this level could trigger stop losses of aggressive bears, resulting in a short squeeze. The pair could then climb toward $0.11.

This positive view could be negated if the price turns down from the current level and breaks below the intraday low made on Dec. 30. The pair could then decline to the pivotal support near $0.05.

Related: US will see new ‘inflation spike’ — 5 things to know in Bitcoin this week

Cardano ADA $0.255 has started a recovery and the price is nearing the 20-day EMA ($0.26). The positive divergence on the RSI suggests that the selling pressure could be reducing.

The 20-day EMA is an important level to keep an eye on. If buyers overcome this obstacle, the ADA/USDT pair could rise to the breakdown level of $0.29. If this level is also scaled, the pair could touch the downtrend line.

Contrarily, if the price once again turns down from the 20-day EMA, it will suggest that bears are active at higher levels. The pair could then drop to the support line where the buyers may step in to stop the decline.

The bulls are trying to start a relief rally, which could face selling at the moving averages. If the price turns down from this resistance, it will suggest that higher levels are attracting selling by the bears. That could increase the likelihood of a drop to $0.69.

On the other hand, if bulls drive the price above the moving averages, the MATIC/USDT pair could rally to $0.97. This level may again behave as a strong barrier but if bulls surpass it, the next stop will likely be $1.05.

Litecoin LTC $74.71 soared above the moving averages and the overhead resistance at $75 on Jan. 3. This indicates that buyers are attempting to take control.

If the price sustains above $75, the LTC/USDT pair could rally to $85. This level may act as a minor obstacle but if crossed, the pair could pick up pace and skyrocket to the psychologically vital level of $100.